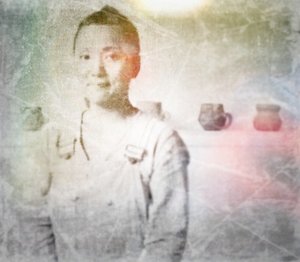 Makiko was born, and raised at a temple in Chiba. Currently she lives in Kanagawa. She moved to Hawaii because that is one of her mother’s roots, and it was a big turning point that is the most influence in her current work. Her mind changed in Hawaii because of her experiences while engaging with the life close to nature, and the relationships with the many Japanese Americans she encountered, all whom have a passion for Japan such as Japanese traditions, etc. After returning home, she moved to Kyoto.
There, she learned the Japanese culture again for the re-recognition of her roots, and identity. She went to the neighborhood of Nara many times, where she touched tombs, and the remains to help her understand ancient Japan going further back. She express the myths, ancient ages, roots, and nature, etc. through her work. Her principle in creating her work is to feel in awe of, and appreciate the lost or likely-to-disappear important existences that protect us ever.